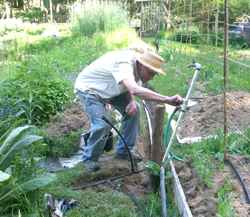 Those among you who have visited the Westgarden this year will know it as a vibrant, thriving, bountiful space. The beautiful weather we’ve been having has certainly helped, as has a team of tireless and dedicated volunteers. Another significant ingredient in our flourishing garden is water, and after a lengthy process researching and rehabbing a historic irrigation system and adding new piping and fixtures, watering the garden has become much, much easier!

Maggie, the Land Care Coordinator, said that the project was funded in part by a grant from the Whidbey Island Garden Tour, and that it began with exploration. “There was an old system in here that had been cut off,” she explained. The water line which had once run from the Farmhouse had been interrupted, so techniques ranging from digging and probing to sluicing and dousing were employed. “We thought we were going to have to retrench everything, but we found the buried pipe that came from the Farmhouse. There were many steps involved, but we figured out how to attach it and where it went, then dug many holes in the garden looking for the pipe.” After the main water line was repaired, the team continued to search for breaks in the old system throughout the garden. The project, in which Beno Kennedy and Cary Peterson were driving forces, spanned several months in early 2014. Our May Work Party provided an opportunity for a team trenching effort, and staff collaborated to close in the trenches in June. Now, the garden is graced with new hydrants and an extensive network of underground pipes with connections to above-ground drip irrigation. Maggie said there are just two more steps to completion: the installation of a flow meter, which will allow us to identify any remaining hidden leaks, and the installation of a drain so that the system can be emptied to overwinter.