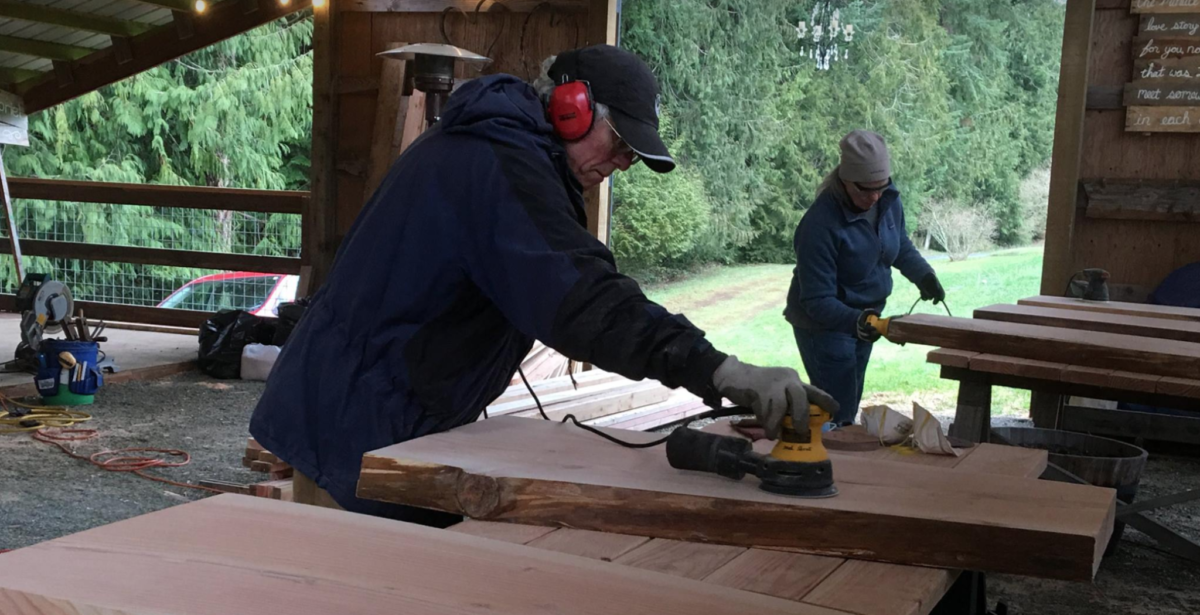 When Joel Shrut was 14, he and a group of friends created a bike ride from Pittsburgh, Pennsylvania to Washington, DC. “We still scratch our heads over how we convinced our parents it was something we could do,” he said. He then explained that he’s done the same ride since as part of a route stretching from Seattle to D.C., and that he gets up each morning eager to use his body for work, service, and adventure. Most recently, his kinesthetic joys have included building on behalf of the Whidbey Institute as the leader of our volunteer construction team. 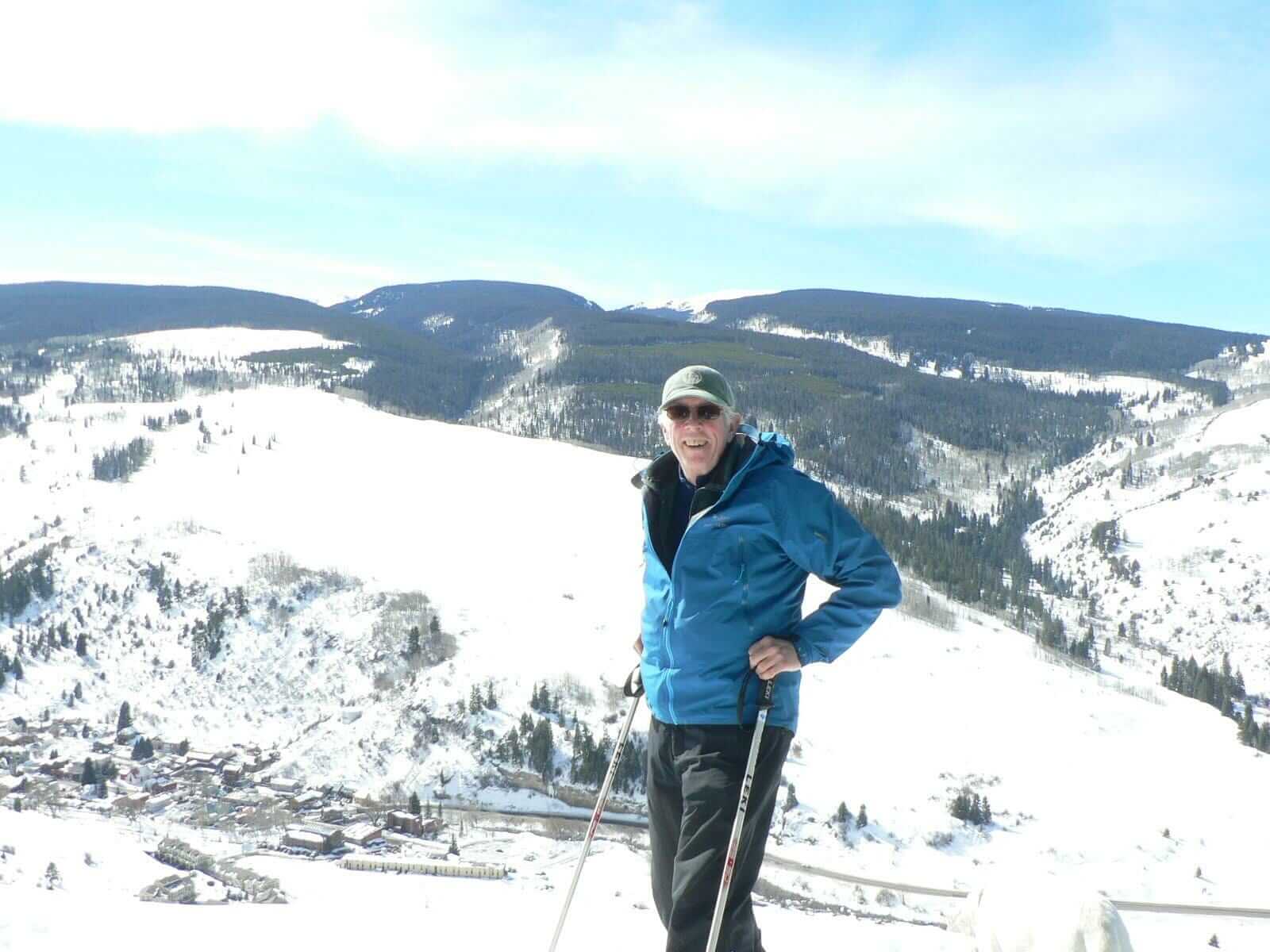 “I’ve climbed mountains around the world, and I’ve led sailing trips in the Caribbean, Greece, England, and France. I love being out and doing things under my own steam. Taking people out on adventures is something that really sparks me,” Joel said. “Building a building, or building these furnishings for the Whidbey Institute, sparks the same kind of creativity in me. I feel like it’s an adventure. We don’t know exactly how we’ll get there, but we know we’ll get there. We have the tools, we have the skill set. We navigate through different channels. No matter what storms we encounter, we hold course. Each project becomes an adventure.”

Joel is also a professional chiropractor, who in 1976 founded the Wellspring Center for Chiropractic and Natural Healing in Dover, New Hampshire. He practiced there for 23 years, and now offers his services several days a week in Langley. This is his 42nd consecutive year as a chiropractor and healer.

Joel is a man of many talents, and he’s been sharing them with the Whidbey Institute and other worthy organizations for much of his life. He first came to the Whidbey Institute in the 1990s, his curiosity piqued by news of the organization from longtime friends Stephanie Ryan and Craig Fleck. Today, he’s one of our most dedicated volunteers, leading a project in several phases to construct, finish, and install beds and desks in our new Meadow Row and Live Edge cabins.

“Part of the Whidbey Institute’s path is to help people find their own authentic center point, the place in themselves where they are able to be at ease, to be resilient, to be flexible, and to be at peace.”

Joel described his first participation at a gathering in Thomas Berry Hall as “like a homecoming,” and he said he’s attended several events here each year since—and not just for Chef Christyn’s food! When asked about the inspiration for his current volunteer project, he gave an answer rooted in the philosophy of leadership and learning. “So many of my friends are offering leadership workshops. Leadership is a wonderful element of our lives, but followership is also a wonderful skill! I kept hearing the word ‘cohort,’ and I wondered how we could come together to do things that were more than intellectual. I wound up thinking that what I’d really like to see here is a cohort in Carhartts—a group of people thinking about leadership while actually making something with their hands,” Joel said.

“There’s a sense of ownership when you’re sanding a board, or building something. To work on the WI2020 expansion project directly creates a legacy—we’re putting our human energy into the future of this wonderful organization. I didn’t hesitate when I was asked to be a volunteer leader for this work—I have the skillset, and I know who to tap on the shoulder when I don’t.”

Joel said the work thus far has been an easy, low-stress, and highly productive experience. He and a team of skilled volunteers have built 19 beds and rolling dressers to go under them, and have cut, shaped, and sanded live-edge desks made from site-harvested timber.

“Energy is building for a grand completion of this part of the project,” Joel said. “We’ll be welcoming as many volunteers as we can get for finishing the furniture in Thomas Berry Hall in February.”

Reflecting on his long history with the Whidbey Institute and his inspiration to be involved in this way now, Joel compared the organization to a living organism, its health ebbing and flowing in response to challenges and change during its 45 year history. “It seems now that the Whidbey Institute is moving toward real sustainability—a lovely word that often gets used but which can be really challenging to achieve. I’m really impressed with Kate Snider, Heather Johnson, and others on the current team who love the spirit of the place but who also take a practical approach to its future. That’s the exciting part of this whole process: to help the Whidbey Institute move from being an organization with a great dependence on charitable giving to being a self-sustaining organization, with charity as the whipped cream on top.”

“With this project at the Whidbey Institute, we’re creating something that will have lasting legacy in a place that has a mandate for bringing healing energy and sustainable action forth into the world.”

“This buildout is a pivotal thing for the Institute,” Joel said. “We are creating the potential for more people to come and feel warmly greeted, to feel welcomed into a home away from home—and from there, to have tremendous learning experiences. Part of the Whidbey Institute’s path is to help people find their own authentic center point, the place in themselves where they are able to be at ease, to be resilient, to be flexible, and to be at peace,” Joel said. “Finding that center, both as individuals and as a collective, allows us to turn and radiate that energy outward—to make a more just, caring, sustainable and wholesome world.

In an afternoon conversation scheduled for one hour and lasting over two, Joel and I talked of many things—of his life-changing experiences climbing in Peru, of his moonlit night kayaking in the Salish sea, of his recent visit with Ram Dass (“Just remember,” Dass told him, “it’s just moment by moment by moment.”) We ended with Joel sharing his passion for the Whidbey Institute’s current site evolution and the volunteer project.

“With this project at the Whidbey Institute, we’re creating something that will have lasting legacy in a place that has a mandate for bringing healing energy and sustainable action forth into the world. I am privileged to share along with many others the loving energy generated by our collective work! Love is spirit in action.”

Join us during our volunteer staining week February 19–22, 2018 in Thomas Berry Hall. We’ll be finishing all of the bed frames and the desks with Profin, then bringing them over to their final location in the finished Meadow Row and Live Edge cabins! Email [email protected] to get involved.