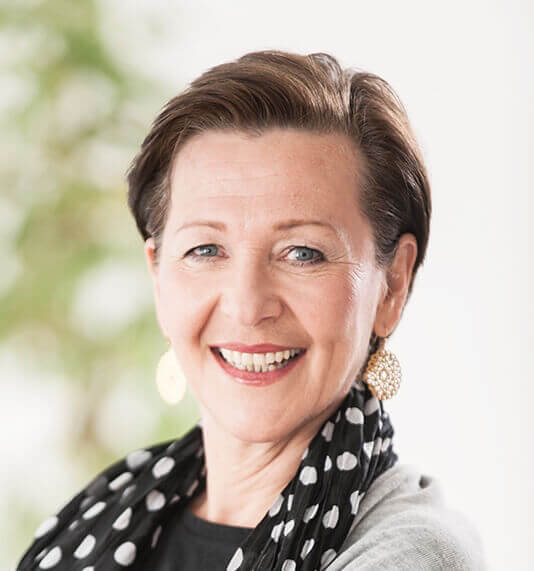 Driven by Purpose: an Interview with Christiane Seuhs-Schoeller

Christiane Seuhs-Schoeller, who describes herself as “blissfully unacademic,” is passionate about purpose. She’s drawing from three decades as an entrepreneur in business consultation and leadership development in her current roles with Encode.org and Evolution at Work. The former supports purpose-driven entities in “baking in” and legally protecting purpose as a bottom line, while the latter supports personal development and capacities for people working in entities that have integrated or are integrating the principles of self-organization. I connected with Christiane last week about the Language of Spaces, a framework which supports expansion of the human capacities required to thrive within the increasing complexity of the new world of work. Here’s that conversation. —Marnie Jackson

M: Christiane, I know there’s a Language of Spaces Introductory Workshop coming up at the Whidbey Institute in November. What could someone expect to experience there?

C: Language of Spaces is a holistic framework that consists of content and practices to develop four core capacities people need on their journeys into self-organization. These capacities enable us to arrive fully and wholly in that new context. In the two-and-a-half-day workshop, you’ll get a first taste of some of the practices and learn a few practices to take home with you. This basic understanding is also great preparation for Evolution at Work’s nine-month Language of Spaces certification program, which is suited to coaches and consultants serving organizations and businesses on their way to self-organization.

Have you noticed a shift in general awareness about self-organization as a viable way of working together?

I’ve been working in this realm for a decade now. When I first started in this work through Holacracy, it was considered a really out-of-this-world thing. Nearly nobody knew about self-organization, and many people were dismissive or unable to understand. It’s safe to say now that this is not going away. This is the future of work, the future of organization, the future of business.There are a lot of things that point in that direction. Just to name a few: Holacracy is growing, ResponsiveOrg has been around for a while, and the teal movement is growing. Frederic Laloux touched a nerve with Reinventing Organizations.

Can you describe how self-organization works in businesses and organizations?

Self-organization is the evolutionary principle of the universe. I propose that the universe expresses itself through growing to ever-increasing complexity. Everything is a part of that universe, and you could look at it as a holarchy—a natural hierarchy in which everything is an independent, autonomous part of something that is itself a part of a bigger autonomous part, and so on . . . until you reach the level of the whole. In this system, each part has a purpose and a contribution. Galaxies, stars and planets, earth, living systems—nature, in all its expressions, consists of self-organized systems. Like other natural phenomena, humans are completely self-organized—our natural systems broken down into organs, organelles, cells, molecules. Every part has the capacity to evolve in the way that is needed to serve the bigger whole.

Our organizations, as they are conventionally built, have been built as a power hierarchy in which people become more powerful the higher up you go. That has served our businesses and organizations well for a long time, but modern life involves more complexity, new technology, and a rapid pace of change. We each have access to tremendous amounts of information, and in many ways things are no longer complicated—they’re complex. They can no longer be controlled. The more you try to control rapidly changing systems, the more dysfunctional they get. For this reason complex systems—like nature—need self-organization‚ and the right amount of self-organization, to evolve. On one side of this sweet spot is rigidity. On the other, chaos.

The more you try to control rapidly changing systems, the more dysfunctional they get. For this reason complex systems—like nature—need self-organization‚ and the right amount of self-organization, to evolve. On one side of this sweet spot is rigidity. On the other, chaos.

How are the humans in a self-organizing entity connected to the organizational purpose?

A self-organizing entity modeled on nature has its own self-organizing dynamics. It’s commonly said that the danger in comparing organizations with nature lies in the fact that the parts of nature don’t have their own independent will, needs, and psyche. In an organization, on the other hand, we have people who have their own will, needs, psyche, and purposes while working in these organizations. Self-organization requires the understanding that the social system and the organizational system are two different things, yet not separate. Language of Spaces offers ways to differentiate the will of the organization from the will of the people and make sure both are honored and served.

There are two very different contexts that show up when we are engaged in an organization. These are the purely organizational, and the purely personal. Each context is further divided practically into two spaces: in the organization, we look at operations on one hand and governance on the other, in a very differentiated way. Operations relates to activities in established roles and accountabilities, while governance relates to the spaces where roles or policies are created, removed, or changed. In the personal context, we look first at the relationships, or interpersonal space, and then at at the individual—the “I” perspective, the “I” space. How much pain do we suffer in interpersonal aspects because of the unclarity of the governance? There can be so much misunderstanding, such heavy emotional and personal weight, just because something in the definition of a role or an accountability is not clear.

What are the four capacities covered in the Language of Spaces?

The first capacity, Differentiation & Integration, includes the ability to differentiate these four spaces and an understanding of the value of that differentiation. While people and organizations are never entirely separate, four perspectives on any issue can be entirely differentiated and then integrated through very different steps toward a solution.

The next capacity is Purpose Alignment. You’ll become aware of your own personal purpose or calling—your “big why”. You’ll answer the question, “what wants to come into the world through me?” An organization always has a purpose, and we each best make a conscious decision to contribute to an organization’s purpose when our purpose and the organization’s have resonance and proximity—that is, when they are aligned.

We’ll look at the capacity of Self-Realization. It’s an invitation to step into your full, authentic power. Getting to know yourself better and inviting others to do the same grants power with, and not power over.

The final capacity is Inner Leadership. It is the capacity of becoming aware, listening, trusting, and acting on the voice of our inner wisdom. This encapsulates many practices and skills, including attending to our body language and body sensations—the language of our subconscious. We connect to our intuition and inner wisdom, and we practice meditation, mindfulness and presence, awareness, and attunement. Inner Leadership involves integration of these subtle states into daily practices.

Who would benefit most from the Language of Spaces Introductory Workshop, and what might they gain?

This workshop would be great for anyone who’s heard about self-organization and is curious about what it means for the organization or for people, or people who are currently exploring these ways of working together in their organizations. It would also be great for coaches or consultants working with self-organizing entities.

Any organization moving into self-organization, no matter at what speed, will at some point experience resistance from people. Many people can become insecure, and start asking, “what the heck is going on here? What does all this mean for me?”

For organizations that want to liberate their purpose and embark on the journey of self-organization, this will be a highly valuable experience. It can take away fear, give you hands-on practices, and build an understanding of what actually happens in self-organization. You’ll gain practical tools to deal with the insecurity, common challenges, and natural fears that can arise.

I recently connected with a CEO and founder of an organization in Japan. After two days in an Introductory Workshop, he communicated with great feeling that he’d had one of the biggest epiphanies ever as an entrepreneur—he finally understands that he and his organization are not fused. He experienced tremendous liberation through seeing how he as an individual, working from his personal purpose, can look at the purpose of the organization as separate from his own. From there, the organization can be freed to prosper on its own evolutionary path.

Learn more and register for the Language of Spaces Introductory Workshop, offered at the Whidbey Institute November 4 through 6.