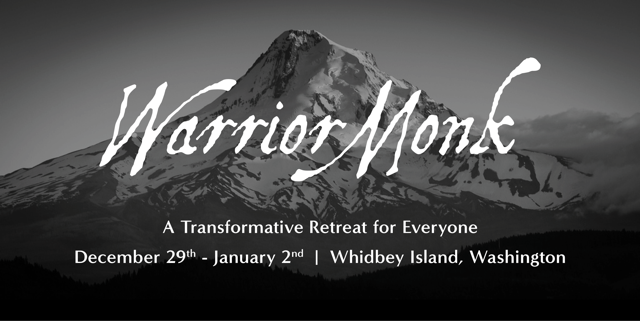 Enter with intention: Warrior Monk retreats at the threshold of a new year

Participants pay $580 in advance for meals and lodging and at the end of retreat are asked to make a tax-deductible tuition contribution based on value received and desire to support the work.

Marnie: How did you first decide to hold a retreat over what is generally considered a holiday break, and why?

Dan: It sort of happened by accident. The first was a staff retreat and training session, where we came together to do our own personal work and refine the retreat. The typical New Year’s tradition of partying and making ungrounded resolutions never held much appeal for me personally, and I saw this as a way to escape society at this frenetic time to be with some very thoughtful and fun friends. Turned out a lot of others had the same idea—people heard of it and started requesting a soulful and intention-filled way of entering the new year. We’ve now held about eight of them in the last decade, all here at the Whidbey Institute.

How similar is a new years retreat to a traditional Warrior Monk retreat?

In structure and process the retreat is pretty much the same. However, most people bring a different kind of energy and intention to this one. That inevitably influences where we go, both in terms of the depth to which the group travels and the way we adapt the process day-to-day to support individuals’ direction.

Can you say more about how Warrior Monk supports people with intention-setting, and how that might differ from making a typical New Year’s resolution outside of the retreat context?

The essential focus of Warrior Monk is to support people finding more peace, love, purpose, and power in their everyday lives. At the same time, people generally hold a heartfelt aspiration to go back into the world with these qualities not only for ourselves, but also so that we can differently for others—in our relationships, work, purpose and communities. With this new year retreat I see people holding that usual co-focus, while also holding a strong desire to let go of the year past and do the next year differently.

Dropping out of and unplugging from life and entering into a community container like this creates the gift of liminal space—that place where I’m no longer limited to who I’ve been, and I’m not yet who I am about to become. It’s the place of personal alchemy. In this particular retreat, suspended between this year and next, that place of potential for transformation is deeper, and more open.

Some participants have compared the feeling to what the Celtic tradition calls “thin places” . . . the places where resistance and the masks we wear more easily fall away and forward movement is less encumbered. Where we more easily become more of our true essential self. Others have called it out as a metaphoric bridge between what they wish to leave behind that no longer serves them, and what they carry forth as the very best of who they are.

The most consistent feedback I’ve received over the years is how much Warrior Monk helps people not only make it through the transitions they’re in, but also helps them grow through transitions and better love the self that they find on the other side.

I love E.B.White’s words, “I arise in the morning torn between a desire to improve (or save) the world and a desire to enjoy (or savor) the world. This makes it hard to plan the day.” I see a modified version of this quote on the Warrior Monk website.

To aid people on their journeys in the year ahead, we part with clear plans for small group follow-up. This has proven to be a great way to sustain the positive outcomes of a Warrior Monk experience.

I know the pull between saving the world and savoring it all too well. Here at the Whidbey Institute, we talk of human transformation in service to our capacity to meet the world’s challenges. I know you’re personally very involved in leadership and social justice work. Can you share how the work of Warrior Monk supports someone working for justice and equity in these challenging times?

Helping people gain heart-engaged clarity on their own unique values-based purpose, and putting power behind that, has been a consistent thread that runs through every retreat. These days, even more than ever, it seems we need depth and inner work to draw from in order to really engage the issues facing humanity.

Each of us needs the clarity of what’s mine to do at this time. What’s revealed in the retreat sometimes surprises people. A new level of discernment almost always emerges, not only about what matters most, but also about what does not. What is taking too much of your precious life energy?

Each of us needs the courage to engage in clear and powerful ways. Clarity and power comes from the realization of what our unique power is, and the willingness to be in vulnerable support and collaboration with others.

When we gain a felt sense of how to hold greater paradox within ourselves, we find both more compassion and more fierceness for the work we do. An 18 and an 89 year old who became friends attending a retreat last year are working on a service project together. They’re telling everyone, “we’ve discovered our sweetest and fiercest selves, and we’re about to unleash both on the world!”

Mindfulness training, practiced over the five days of Warrior Monk, gives us resources to carry our work forward in a healthy way: the self-care and self-compassion that lets us not burn out, and the wisdom to know our own limits.

I first participated in Warrior Monk in 2015, and the experience was was deeply transformative for me. During our five days together, I gained clarity around some ways I’d been lying to myself and others in a misguided attempt to be kind. I uprooted some codependent, damaging behaviors that had previously been invisible to me, and saw dramatic, healthy, and lasting changes in my personal life over the following years. I didn’t know it was possible to be as joyful and as authentic as I am now. Do you hear that from others—that what they experience in Warrior Monk creates lasting change?

Dan:  Yes, we consistently hear that from people. Not only does the initial impact continue to live in them, but the experience also allows them to more deeply integrate other work they’ve done.  This is what Warrior Monk is designed to do, and the reason why we’ve stayed committed to the five day format and kept the groups small. As you know with Warrior Monk, it’s the people who show up and inhabit these “circle communities” that really make it work. We see sustainable outcomes in the lives of the individuals who experience Warrior Monk, and that is the primary reason I’ve stayed committed to steward this work for 20+ years.

I hope I can join you for a new year retreat sometime. I know space is limited to 24 participants this year, and I won’t be among them due to prior commitments. It sounds like you’ve found a wonderful way to cross the threshold of the new year with kindred spirits on a journey of growth and self-discovery.

Yes! Each year I feel like I’m getting away with something, hanging out with some of the coolest people on the planet at the most exclusive New Year’s party around! Even after a 100+ Warrior Monk retreats, I’m still enthralled with how beautiful and purposeful humans are, and humbled by the deep longing and commitment found here. I love standing at the threshold of the new year with others, filled with intention and supported by community.