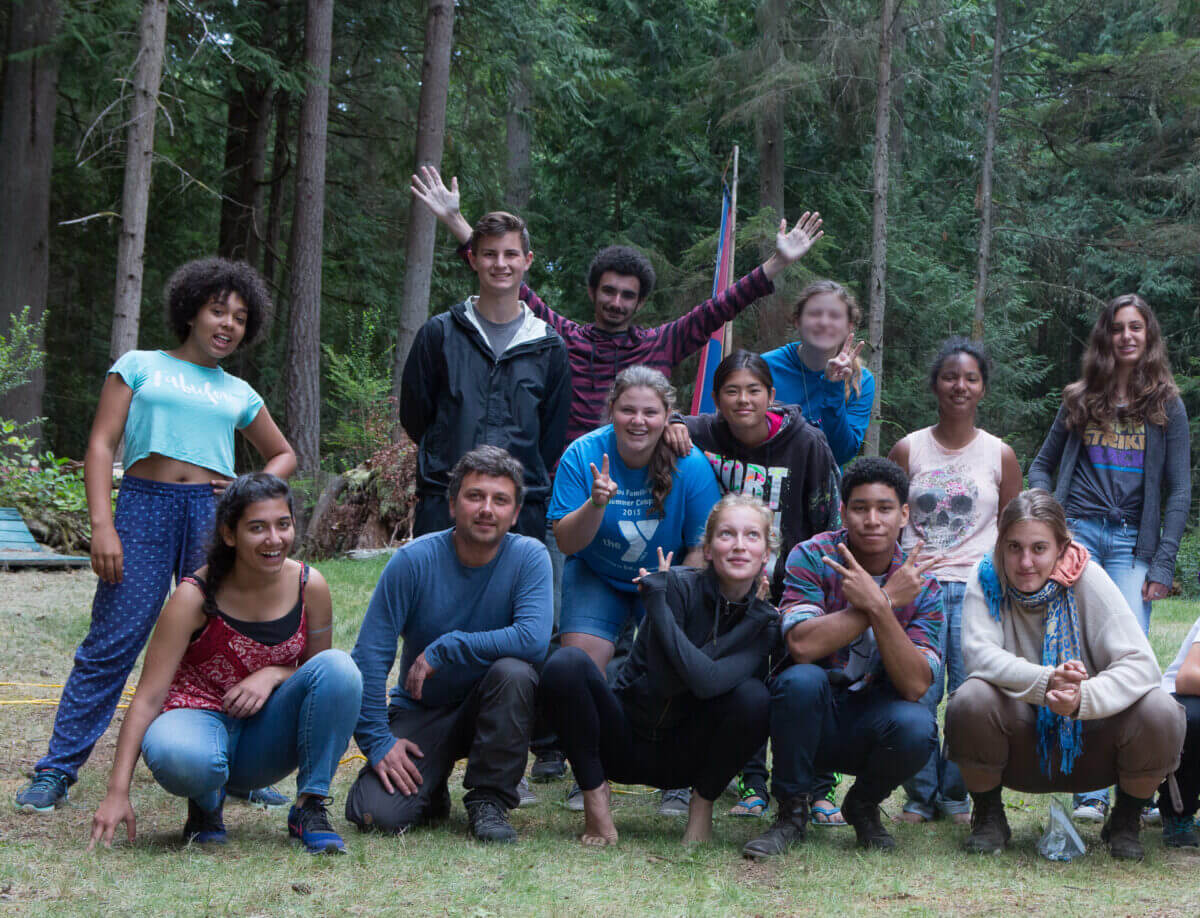 I recently had the opportunity to connect with Themis Gkion, a Creative Empowerment Facilitator with Partners for Youth Empowerment (PYE). Connecting via Zoom between Greece and the United States, we enjoyed a wide-ranging conversation about the PYE approach to learning, about larger trends in education, and about what is possible when the power and potential of young learners are unleashed. As an outcome of our conversation, I’ve been personally inspired to take an online Creative Facilitation 1 course from PYE in June. —Marnie Jackson 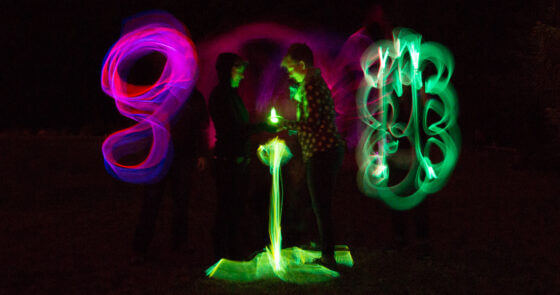 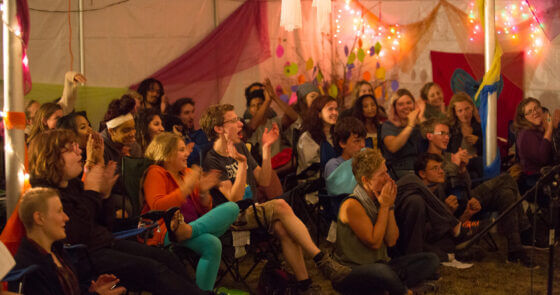 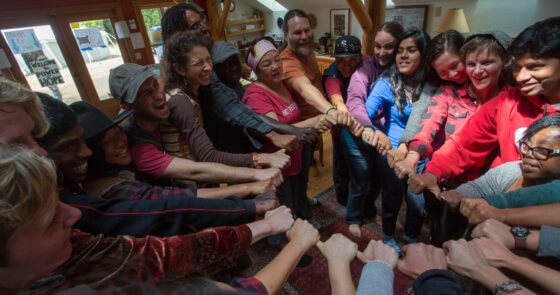 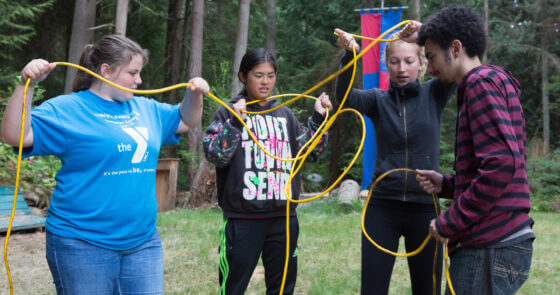 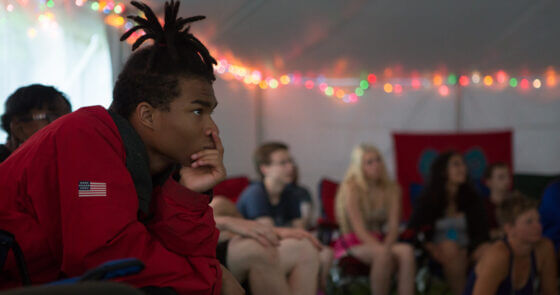 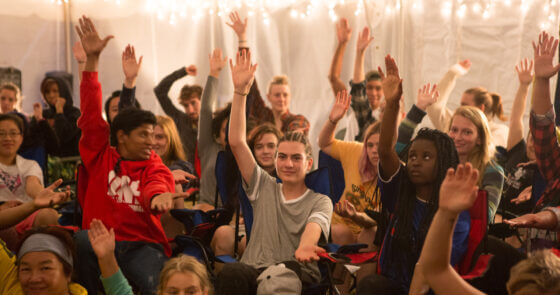 All photos courtesy PYE/Themis Gkion.
In header photo, Themis is pictured in the front row, second from left.

Themis Gkion’s earliest memories relate to roaming around the grounds of a primary school founded by his grandmother, often watching older students working together through a project or challenge. His life was profoundly shaped by the innovative, collaborative learning style he saw and experienced there, and he eventually found his way into a career centered on nurturing that style of learning in others. What he learned and now nurtures in others are what he calls 21st century skills, or ways of learning and thinking that allow the learner to apply methodologies and tools from any discipline to whatever emerging topic, opportunity, or challenge they might encounter, and thereby to access greater joy, freedom, satisfaction, and meaning.

Though he started life with a focus on mathematics and engineering—applying these skills first to academics, then to research and development in manufacturing and later to dealing financial derivatives on the global markets—Themis realized early in his working life that in order to be satisfied, he had to find a path where meaning mattered more than earning. He moved into a fourth career after a sabbatical in France, where he earned an MBA and re-centered his passion for transformative education. He has since founded Flow Athens, where he trains executives, educators, and students in 21st century skills such as creative confidence, human-centered design thinking, innovation, collaboration, effective communication, and learning how to learn.

When he encountered PYE via a Creative Facilitation training offered in Athens, Themis found a model that was a great fit with the approach that he already took to learning. PYE’s Creative Facilitation approach, he discovered, was ideal to support the rapid development of the skills and mindsets most needed by learners today.

“Speaking with [PYE Facilitators] Gwen and Peggy, we realized we had the same goal and mission, but had been using slightly different tools,” Themis said, “Where I had been using technology, games, and DIY projects to trigger students’ imagination and invite them in, PYE was using the arts.”

“I was really impressed by the Creative Facilitation structure and methodology, which gave me specific tools that I could readily apply. It allowed me to do my job much better, with more impact and more self-confidence. It helped me instantly become better at my quest.”  After participating in his first Creative Facilitation course, Themis continued to learn with PYE and became their first Greek-speaking facilitator.

“I was really impressed by the Creative Facilitation structure and methodology, which gave me specific tools that I could readily apply.”

Themis served as an adult facilitator, or “Zilla,” with PYE’s Power of Hope Camp at the Whidbey Institute in 2016. Joining two days before the start of camp, 20 to 25 youth workers, artists, educators, and adult facilitators from a variety of disciplines came together as a tightly-knit team led by two or three very experienced lead facilitators.

“Together, we learn to create a safe environment where people feel empowered and safe to open up, express themselves, be as they want to be, and take those creative risks which will gradually allow them to effect this transformation in themselves,” Themis said. “We were each empowered to share any creative workshop that we felt would empower youth to express themselves. We had plenty of opportunity to propose workshops and later facilitate them with subsets of the whole youth cohort.”

Themis said that one powerful aspect of his experience as a Zilla was learning to replicate and implement this model in Greece. “I was trying to study how the lead facilitators empowered me to do what I was doing, and how they also led the group of youth and adults in order to create this magic,” he said. Two days after the facilitators’ arrival, youth joined the mix. “There was a vast diversity in youth’s past experiences,” he said, “and some had been through difficult situations prior to coming to camp. I witnessed each and every person grow up, stand firmly on their feet, and become better able to plan their own future.”

“Witnessing those young people transform, bloom, and open up over a very specific time span, over eight days has been the most intense transformative event I’ve seen,” Themis said. “As a result of what I witnessed during that week, I felt confident that each and every person there would have the capacity and the strength to navigate their lives successfully.”

“Witnessing those young people transform, bloom, and open up over a very specific time span, over eight days has been the most intense transformative event I’ve seen.”

Themis recognizes that most youth around the world experienced some form of disruption in the past year, and that many have been remotely schooled since spring 2020 due to COVID-19.

“They may be lacking connection, and their sense of belonging in a group of similar-aged youth may have been disrupted, but I believe that this disruption is not more severe than individual disruptions that many youth had already experienced to date,” he said. “The lucky ones will have the privilege of attending a program like Power of Hope Camp.”

When asked for his thoughts on how mainstream educational systems could evolve to better address 21st century needs, Themis had several suggestions. “First of all, we can empower the teachers, train them, and allow them flexibility to cultivate necessary skills in youth,” he said. “Top-down educational systems require teachers to conform to specific curriculum, and their success is measured based on those standardized tests. There’s no correlation between what those tests measure and the skills that actually need to be cultivated.” Themis expressed a hope that those overseeing educational systems might shift their focus to reduce the importance of standardized tests and come up with other measures of performance and progress.

“The problem with cultivating 21st century skills is that they’re more intangible, more nuanced, and more difficult to measure. That doesn’t make them less valuable,” he said. “We usually fall into the trap of striving for whatever we can measure easily. Teachers and students will then optimize their performance to what is measured. That is probably the biggest problem in educational systems for at least two or three decades.”

“The problem with cultivating 21st century skills is that they’re more intangible, more nuanced, and more difficult to measure. That doesn’t make them less valuable.”

Themis also shared his optimism that models like Power of Hope Camp can be impactful beyond the lives of the individual youth who attend—through inspiring and empowering the youth, through propagating to other youth, and through training and inspiring youth workers. “In order to scale the impact to more youth,” he said, “PYE is also taking steps toward training school teachers.” Creative Classroom, the school teacher training program, is currently under assessment to measure the impact of these trainings and plan for accessing funding and scaling up. “Our current circumstances will require opportunities at a larger scale than the existing model of in-person youth camps.”

As a closing reflection, Themis spoke to the rapid evolution of online facilitation skills among the PYE facilitator community.  “If you had asked me before the pandemic hit about holding this work virtually, I would have said, ‘no way, impossible, I’m not even trying.’ What we do, what PYE does, requires in person presence, physical presence. But after the pandemic hit, we were forced to get out of our comfort zones, seek answers, take more risks, and learn a lot. There are now a number of PYE facilitators who can replicate a lot of what was happening in person through Zoom.” Themis added that this allows for more diverse international representation at lower cost and complexity, and has additional benefits not foreseen before COVID.

“[Online facilitation capacities] have opened up space for innovation and experimentation, stretching the limits of what is possible. A year from now, if social distancing is no longer required, we can still benefit from some of what we’ve learned. We can combine the best of both worlds.”

To learn about the 2021 online Power of Hope Camp for teens, visit https://www.powerofhope.org/online/

Partners for Youth Empowerment’s (PYE’s) mission is to unleash the creative potential of young people. For 25 years, guided by this mission, PYE has been working to shift the field of youth work to respond to the deeper needs of young people for meaning, purpose, creativity, and connection. They do this by training individuals, schools, and organizations in their Creative Empowerment Model, a unique combination of experiential education, group facilitation, and the arts, which together foster key life skills that help youth thrive in a rapidly changing world.

PYE started when founders Charlie Murphy and Peggy Taylor held a five-day gathering for teens called Power of Hope in 1996. This gathering, in Legacy Forest at the Whidbey Institute, became the model for Creative Empowerment: an intergenerational experience infused with creativity and community. Today, through a train-the-trainer model and with a circle of global partners, PYE trains over 6,000 practitioners in 40+ countries annually. Through their online learning network, they regularly engage 5,000+ practitioners around the world with free resources and peer education opportunities. These practitioners, in turn, reach over 300,000 youth each year with programs that ignite purpose, power, and possibility in youth. Excepting the disruption of COVID-19 in 2020 & 2021, Power of Hope Camp continues to serve approximately 50 youth annually in Legacy Forest at the Whidbey Institute. Power of Hope Camp is being offered virtually for summer 2021.