Woodworker Marian Quarrier recently took a few years off from building furniture. The time was full for Marian and her wife Betsy, as they built a shop and made the move from Seattle to their long-held Coupeville acreage. When she took up a slab of Chinook White Pine after her long hiatus, Marian was not expecting a battle—but she got one!

“I had plenty of ideas, but to put the ideas into the wood was difficult,” she said. In Marian’s attempts to put a serpentine cut into a pine bench seat, for instance, the wood pulled her bandsaw in every direction except the one in which she wanted to go. “The wood behind the blade was pinching down, and the cut I was making was closing. I could not stay on the line I had drawn, for the life of me. Ten inches from the end, it opened up, split, and fractured with a loud, startling bang.”

This moment was pivotal in Marian’s relationship with the pine wood. “It came to me, after weeks and weeks of work, that the pine spirit had been fighting me. Then, finally, it breathed a sigh and thought, ‘ahh. That’s how I want to be.'” In the moments which followed, Marian was able to revise the cut in a way that made the bench much more beautiful than it ever would have been had she followed her original plan. 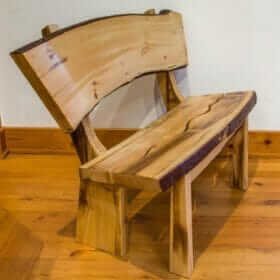 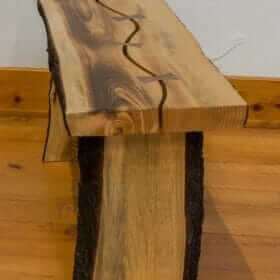 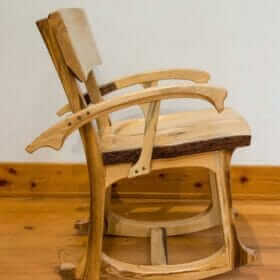 Marian’s beautiful bench, as well as a love seat and an intricately-crafted rocking chair (her first chair!), were star pieces in our Fifth Season pine gallery last month. Her experience with the rich, storied wood was both spiritually and creatively energizing, and her participation in this project provided an opportunity to deeply connect with this place which she’d never before explored.

Marian described encountering the Sanctuary while exploring Chinook with Betsy at the close of the gallery weekend. Their walk took place while both were feeling emotional about the weekend, the project, and the many new friends they had just met. “As soon as  I stepped in the Sanctuary, I felt engulfed with warmth, and with the smell of the place. It was an old spirit,” she said. That day, both Betsy and Marian felt called to stay involved at Chinook.

Marian’s career has been varied. With interest in both design and the human body, she’s worked in fields as varied as landscape architecture and physical therapy. Her woodworking passion was ignited when, as a young woman, she helped her brother build boats and restored her own old wooden runabout. Her formal training came through a cabinet- and furniture-making program at Seattle Central. Now, she splits her time between work as a Physical Therapy Assistant in Oak Harbor and her passion for woodcraft. You can see more of her work at www.quarrierwoodworks.com.