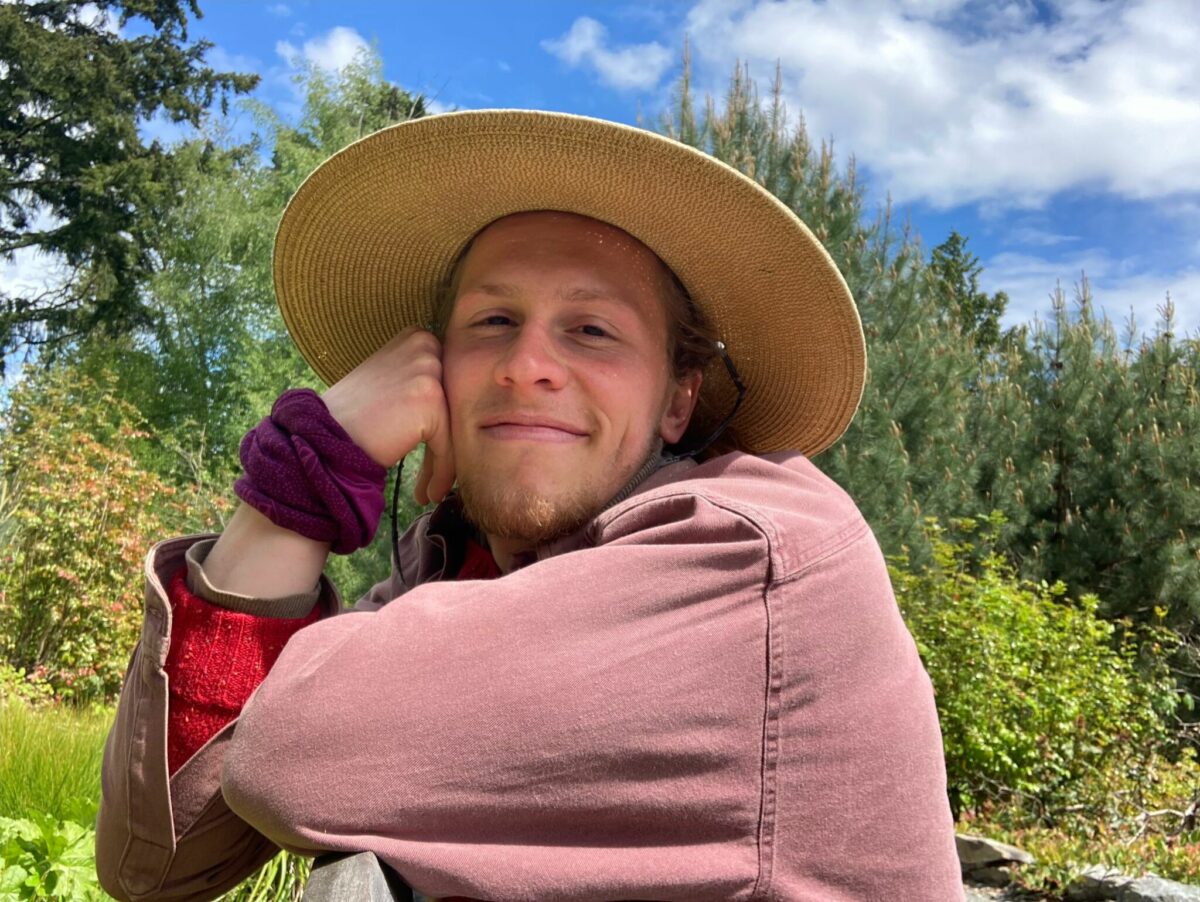 Benjamin Johnston joined the Whidbey Institute team this summer to help care for plants and place. He describes his work as taking care of the land so that people can feel at ease here. From weed whacking and hand weeding to excavating leaking pipes, Ben is willing to engage with any aspect of the work that supports a flourishing place—but his love, and his passion, come through when exploring the relationships of humans with plants and ecosystems.

Ben started his professional trajectory in college, looking through an academic lens. “I felt disillusioned by science’s step back, in looking at everything, and I was really intrigued by agriculture’s complimentary way of participating in an ecosystem that we live in,” he said. This interest led Ben into work on organic farms.

“As I was working on organic farms, I became aware that just working on a farm wasn’t enough to address the times we’re in, and heading deeper into. A deeper shift was needed—within me and within many of us—in order for us to integrate more effectively into our ecosystems.”

“A deeper shift was needed—within me and within many of us—in order for us to integrate more effectively into our ecosystems.”

Ben said his move toward garden design and management grew out of his interest in farming and was related to his desire to move beyond agriculture’s inputs-outputs model. He also sought ways of relating to plants beyond cultivating common food crops. “I wanted ways to meet the needs of the community of people I’m living in, the community of all other life forms, and the land itself,” Ben said. “I started to explore the idea of managing land for the use of people and the health of the land, including and beyond the production of food.”

Ben was connected in community on South Whidbey before joining our team, first as a Good Cheer Garden apprentice and then as a Leadership Whidbey cohort member.

Before joining the Good Cheer team, Ben said he had some apprehension about working for another farm. “Inequities in the food system made me reluctant to grow food that wasn’t accessible to everybody. When I saw that Good Cheer was a food bank, growing nutrient dense food, taking care of the soil, and giving away food for free, I could really see myself doing that,” he said. He said he enjoyed the camaraderie of the Good Cheer garden team, and that his friends there are glad he’s stayed on the Island.

“Right this second, there’s something I can do to make the world a better place. That means getting to know people a lot better and interacting with people—engaging them as fellow stakeholders.”

Ben’s Leadership Whidbey experience offered further opportunity to connect in community and stretch his network and skills. For much of his life, he worked alone or within small teams of farmers and land caretakers. The opportunity to connect more broadly in a community, and to form new professional relationships, was a growing edge for him. “Leadership Whidbey threw me in,” he said, “and revealed to me that right this second, there’s something I can do to make the world a better place. That means getting to know people a lot better and interacting with people—engaging them as fellow stakeholders.” Ben described his year with Leadership Whidbey as an amazing experience that enhanced his ability to face his fear of making mistakes when engaging with other people.

Joining the Whidbey Institute team felt like an easy yes for Ben when our Land Support position opened up this spring. “Given the fact that Whidbey Institute is an organization devoted to learning how we can best be citizens of the Earth, this seemed like an incredible opportunity,” he said.

As we get to know Ben, we appreciate his love of plants, people, and place and his ecological mindset—his approach to the relationships between and among plants, animals, and people, and his relational ways of being. This approach carries through to his hobbies, which are largely tied to his love for plants and his passion for the natural world.

“I’m doing an ethnobotany course,” he said, “spending weekends at many locations across Washington State doing a deep dive into plant identification and uses.” He also loves cooking, and said he makes it a point to cook many of his meals from scratch. “One of my superpowers is bringing people together around food,” he said.

Loving the land, caring for plant communities, and caring for people through the companionship and nourishment of plants are among Ben’s talents, and we are so grateful to have his skill and passion on our team. Look for him on the land or reach him at [email protected] to welcome him to the team!